The 126th Autumn Canton Fair successfully completed its work on Nov 4 3019. The popularity and transactions of China Import and Export Fair can reflect the future demand situation. Therefore, we analyzed this Canton Fair and made some comparison with previous years, hoping to provide some reference for the market.

Participants dipped, and the driven force of Belt and Road remained firm
Overseas purchasers in the fair and export turnover moved down slightly. About 186,000 purchasers who come from 214 countries and regions attended the trade fair, down 2% than that in same period of last year.

In the past two years, the number of buyers has fluctuated slightly in recent years, and the number of different countries and regions changed little. As for structure of participating purchasers, the top ten regions are China Hong Kong, India, Thailand, South Korea, Russia, China Taiwan, Japan, Malaysia and Indonesia. Since 2015, the Autumn Fair has been a key market along the “Belt and Road” market, and the buyers of all countries and regions along the “Belt and Road” reached 85,000, up 1.03% year-on-year, accounting for 45.93% of the total number.

Turnover inched down, and that of textile and apparel increased significantly.
Total export trading value of this fair was $29.86 billion, equal to 207.09 billion yuan, down 1.9% compared with that in 2018.

According to the classified data, mechanical and electrical goods still ranked first in transactions, accounting for $15.941billion, light industrial products accounted for $7.22billion, and $1.683 billion for textile and apparel. 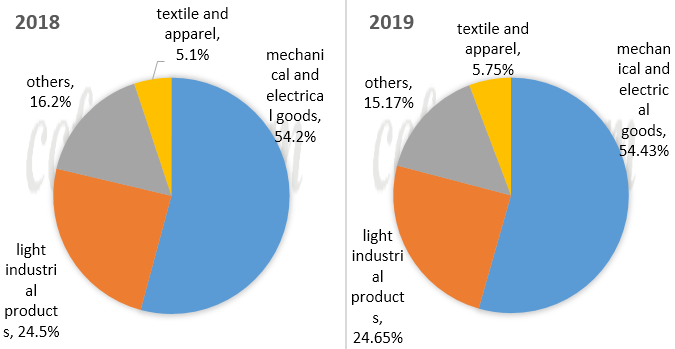 Turnover of major products in China Import and Export Fair in 2018 and 2019
Compared with the proportion of several major varieties in the fair in recent two years, the proportion of textile and apparel increased by 0.65%, mechanical and electrical goods up by 0.23% and light industrial products up by 0.15%. Compared with that in same period of last year, textile and apparel sales moved up by 11.16% y-o-y, light industrial products down by 1.08% y-o-y, and the largest proportion of mechanical and electrical goods decreased 1.52% y-o-y.

Turnover of textile and apparel in the fair has increased significantly, which indicates that export orders for textiles and apparel may rebound, inconsistent with the current market situation and expectations. However, detailed analysis of the data of the fair in 2018 has found that due to RMB depreciation and uncertainty of Sino-US trade negotiation, overseas manufacturers acted cautiously, postponed some orders and stood on the sidelines. Therefore, turnover of textile and apparel in 2018 Autumn Canton Fair was low, down by 12.74% compared with that in same period of 2017, while that in 2019 Autumn Canton Fair increased significantly as trade war eased, there was coping style in the market, and some orders cannot be transferred from China in the short term. However, compared with that in 2017, turnover of 2019 fair still dropped by 2.97%, indicating that although the future orders recovered, it still shrinks from past years.

There were several reasons for falls in participants and turnover in China Import and Export Fair. First, economy of developed economies like China, US and Europe peaked, and the economic growth differentiation of emerging economies intensified. Therefore, global economic growth will slow down in 2019, and global economy may continue to slow down in 2020. Second, unilateral trade protectionism affected the world's multilateral trade system. Trade tensions in US, China, Europe, Japan, Mexico, Canada and other countries will have a negative impact on global multilateral trade. The reform of the multilateral trade system became more and more common, but there were many differences on how to reform. Third, a continued geopolitical crisis and political turmoil may aggravate the global economic instability. Uncertain prospect of Brexit and the riots in Chile will affect the global economy.

Next: Spot Price Of Cotton Lint Was Firm, Performance Of Zhengzhou Cotton Was Not Good